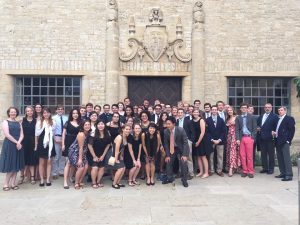 How does one measure one of the most influential experiences of their college career? It could be measured in hours spent in the library, lecture, or in the pub. It could be counted by the massive amounts of coffee and tea consumed. It could be assessed by the success of the day trips to Bath, Swansea, Wincester, and other places on the Great Western Railway. Each of those measurements were important parts of my experience, yet my time cannot be calculated in hours, pints, or miles traveled. It can only be understood through stories which incorporate all of these elements.

After a long day working in the library and overall frustration, we knew one of our friends could use a cup of ice cream. We did not care that it was raining outside because we knew it would make them feel better. And as I walked back from the local ice cream shop, I realized just how beautiful Oxford was. How beautiful it was because it was filled with people who cared for one another. I felt completely content in that moment as I was getting drenched. The relationships one forms in this program expands beyond the walls of the lecture room. I spent almost every waking hour with a group of people who previously I had never really known. I learned to respect my colleagues as academics and as people. They were the shoulders I would lean upon or the backboards I would bounce ideas off of for my papers. They listened and debated with me over topics such as the influence on religion in Elizabethan England, the meaning of Marvell’s poems, or we would talk about current events, John Mayer, and Quiz Bowl. These are the people I would brainstorm with over ideas about Jacobean foreign policy and over where we wanted to travel that weekend. I want to leave the blog with this last thought. The Virginia Program at Oxford not only is a challenging academic program. It is a well rounded experience which gives its participants to opportunity to travel, forge relationships, and learn about themselves. It was a life changing opportunity which I was fortunate to be part of this summer.