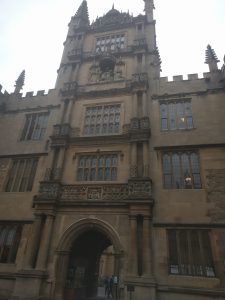 The title of this post is not only the title of the GroupMe Message for all the VPO students, it also represents our love and constant attendance in the Bodleian Library. The Bodleian, or the Bod as we fondly refer to it, is a world renowned library which we all have the privilege utilizing as VPO students. It was built in 1602 and was the first library to request a copy of every book published in England which still occurs today and adds up to around 1,000 books a day. Even though the library may seem bogged down, it continues to uphold the prestige it has maintained for centuries. The library as a whole is extremely serious about preserving its many books. Therefore, as a new reader of the library, one must recite the following oath:

“I hereby undertake not to remove from the Library, or to mark, deface, or injure in any way, any volume, document, or other object belonging to it or in its custody; not to bring into the Library or kindle therein any fire or flame, and not to smoke in the Library; and I promise to obey all rules of the Library.”

I was most definitely intimidated by the oath and ceremony preceding it on our first official day of the program. But it put in perspective how much the staff cares for the library and also makes me want to protect it even more. The absolute beauty of the library is not only recognized by readers and tourists, but Hollywood has also taken note. The most famous movie set in the Duke Humphrey’s Library of the Bodleian was the Harry Potter franchise which used this space as the Hogwarts library. Another marvelous place to study is the Radcliffe Camera. It is the most quiet portion, and only readers have access to it. It can be quite intimidating to sit in there because one sneeze or pen drop rings through the entire space. Yet even though it can be embarrassing if you drop your book too loudly, I am constantly inspired to work diligently in a space so vast and inspiring.

Now even though we frequent the Bod almost every day, the St. Anne’s Libraries are still quite extensive. The new library which was recently finished in January 2017 has many private study spaces, computers, printing access, and a rooftop garden. This is where we have our daily lectures on the top floor followed by coffee with the lecturers on the rooftop garden. The old library is where most of the historical and English books can be found and contains magnificent wood paneling in the reading rooms. Also, since St. Anne’s started its life as a women’s college, the library contains more content than most Oxford college libraries because women were not allowed access to the Bodleian for quite the beginning of the college’s life. I think that this is a huge advantage of having the program here because we are not forced to walk to the Bodleian unless of course we chose to go. Also, the librarians

I am quite a nerd when it comes to libraries, and I find myself to be quite at home in them. I adore the smell of old books, the peace and quiet, and being surrounded by fact and fiction alike. I try and soak up any opportunity to simply sit or study in the Bod or St. Anne’s libraries because the opportunity is always there. When the opportunity to be present in one of the most famous libraries in the world presents itself, why not seize it? 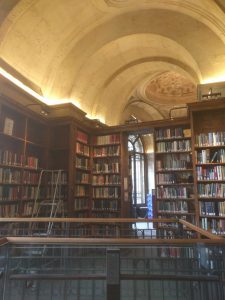 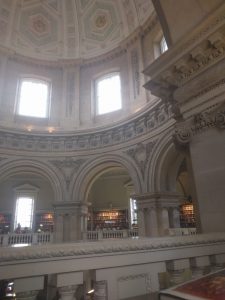 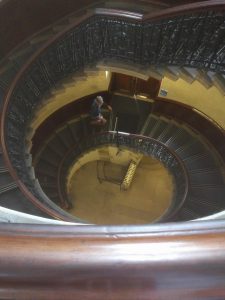 ~Behind the scenes in the Radcliffe Camera~